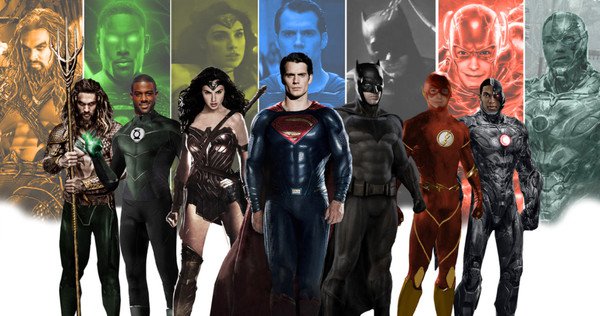 Upcoming movie Justice League is a structure to receive the appreciation of all DC Cinematic Universe struggle. Like Captain America Civil War in which Captain has recruited his team for certain unfinished business. Similarly, Batman in this movie recruits the DC most super brand to work him as a team in a mission to face an undeclared villain. It is a tough job for Batman to recruit individual superheroes; with the unique skill to serve and save the world.

It will disclose soon in the near future about the deadly thinking of the Villain. Concentrate how batman selects best seven including him to challenge someone who is the real enemy of the world. We like to share our views regarding the recruited member of the Justice League:- Batman is the father of DC world, he has been famous since it first releases a comic book. After having such popular achievement many children including elders follow him. In order to continue such popularity, DC Comic continued writing and started animated movies on a big screen. Batman started his journey lonely with the support of his best companion Robin which was unfortunately died. After that, a Robin was introduced by DC Comic in Batman Game Arkham City. Although we have noticed that there are some other superheroes working in the same pattern as Batman but they have their own justice especially in Gotham City like Red Hood, Green Arrow, Nightwing, and Onyx. The value of Batman is the same still in the eyes of fans.

According to the comic book, Superman was dead after the Dawn of Justice by some enemy which is still hidden by the filmmaker. Every single one knows the abilities of Superman so it is difficult to digest the news of Superman death. Fans are crazy about Superman and Supergirl as much as they can’t control themselves to look like them. DC comic has given Superstars loved and honored regarding their message giving skill, positive thinking and work harder at all stages of life to control the enemies.

Like these Superheroes every person has some weakness, it doesn’t matter that you will surrender yourself in-front of worries. Worries are the krypton in your life, it makes you weak, useless and unhappy. You have take control over your worries which are your enemies with the similar spirit and power of positivity. Superheroes and Superman treat us and give us the message of boldness and confidence in life to take care of others.

One of the most beautiful women of DC comic which was introduced with a unique ability and fighting skills. Wonder Woman sometimes found working with superman and most of the time with Batman in animated movies. It seemed in fan art that Wonder Woman had found her true love in Superman rather than Batman but it wasn’t true. Cos-players who cosplay her looks so pretty and attractive. To elaborate more skills of wonder woman with individual appearance and treat the enemies in her own way.

Mera, the Queen of Atlantis and the wife of Aquaman. This character is appearing first time in DC Cinematic Universe which is played by the most sizzling and the most charming star Amber Heard. It was still pending to discuss her role and the reason behind her creation for this film. She is the wife of Aquaman and has identical skills and power. In conclusion, they are the rulers of Aqua and their duty is to serve their life for the betterment of their people.

DC Fan is well aware of the power and skills of Aquaman through the reading of different versions of Comic book. See Aquaman’s skills in the movie and his past Aquaman movie. This character will need a perfect body and extra-ordinary skills which will be beautifully played by Jason Mamoa. Fans who love him and want to cos-play him need some physically build body or you can try this artificial build body costume with the wig to show the perfect look of Aquaman. Aquaman does not believe the story of Batman regarding the enemy of the world; immense power can be control by the team of Justice League.

Ability to do anything faster than others, this skill makes him different from other but still some personalities who have the identical skill to walk faster like a light as QuickSilver, Reverse-Flash, Zoom, and Max Steel. But the Popularity and fan accumulation of the Flash is being the same. Maybe the reason behind this is that he is still on-screen with Supergirl on her show. Flash has a unique power of fast running; recruited by Batman to work with him. With his power, he can control the time to do work, to reach any place faster than a car, etc.

Cyborg the metallic machine which was discovered by his father after the attack of a monster. He is one of the main characters in teen titans. He has immense power and skill to control the enemy with his latest weapon fitted in his body. This character has similar power as the Ironman has the only difference is that Ironman has designed his own costume with the help of technology while Cyborg gets misfortune and his father gave him that look with extraordinary power and skills. Most of his body parts have replaced with metal to save his life. The character has loved from his appearance in teen titans.

Justice League has planned to team super brand at one platform. The trend has started by the Marvel Cinematic Universe to merge maximum superheroes on one screen; accumulate their fan-fiction and achieve the largest scale of remuneration by a movie. It is pertinent to mention here that they are following the identical trend as bond movies are using to release a movie a year since a long time. A problem arises when they have to retire a superhero who have millions of fans and followers.

Identical superpowers are now found in DC Comic, Marvel Comic and Disney world, like all the universe, have a fastest running superhero in the form of The Flash, Quick Silver and Max-Steel. But this time Disney World has not only given a unique story, look and costume in the form of Max-Steel but they had also put numerous power to him that he can run faster like The Flash and QuickSilver. An alien part attached to Max-Steel; he can also fly with it. His body structure/Costume is like Cyborg in order to face the most dangerous attack on his body without any breakage. Iron man, on the contrary, is the same in power and skills; he designed his own costume with the help of technology and physics.

We have a number of Superheroes available in the Cinematic Universe to which people love, follow and cos-play every year at Halloween and Cos-play convention. That’s the reason why comic books have created a new super brand every year. They need a public opinion about their liking or disliking. Sometimes the situation arises that more demand required to reprint more copies of the similar publication. They can measure the motivational response from the fans; most of the time the scale of popularity crosses the expected limit.

By considering the above situation I must say that the output received from Suicide Squad was unpredictable. The storyline was good, marketing was good, even the act of the superstars was awesome but the movie did not get much popularity. The work of Harley Quinn (Margot Robbie) was honored by the fans by cosplaying the character from the release of its first trailer. Why women are cos-playing her even at work, why Harley Quinn is termed as bombshell among cosplayer. Even though I read a question asked by a man that he likes to order Harley Quinn Suicide Squad Jacket whether it fit on his body or not because for woman all top is designed by considering bust.

Similarly, the work of Deadshot and El Diablo was also loved by the viewers along with other squads. The critics on the movie were the art and act of Joker; not attract millions of fans with huge expectation but many followers found in Joker cosplay. Fans are trying both the outfit of Jared Leto the tuxedo and the leather jacket he wore in the movie. Some fans have issues regarding the laugh he made in the movie was not according to the comic series.

On the contrary, Justice League looks a unique story; super brands recruited to save the world. One thing is still confusing that DC and Marvel have created the new superheroes; then why they are continuing the Legends to work with new skills. I personally appreciate the working of DC Comic and DC Cinematic Universe; they are following the natural phenomena of the world. A single person always has single power until he is expert in several fields. It is impossible to give more power to a single person, if it will happens then he be the guardians of the galaxy because only Almighty God has entire access. He is the one who can make a difference between right and wrong. Who made this world with living and nonliving material. He gives us food, shelter, and clothes.

People posting comments both negative or positive regarding the work of DC Comics and Marvel. Fans who love their super brand would never like to read anything irrelevant about them. Even they are not ready to break the pairs of their super brand. Harley Quinn has mentioned in most of the fan-art and posts with Deadpool instead of Joker, at last, the artwork shows the personal relation of Harley Quinn and Deadpool to born babies and fulfills the demands of the fan-fiction as Harley Pool and Dead Quinn.

People who love soft characters especially related to Disney like Elsa and Anna of Frozen would avoid seeing the violence which is a pillar of DC and Marvels movies. It is the cinematic universe who are not only selling their brands; they took away people from their tension, depression, and frustration. I feel that by watching these movies based on comic stories make the mind relax and calm.

Finally, we come to an end with the description of all the superheroes cast in the movies. The best thing is that they are creating suspense to declare the villain of the story. Further, who is going to play such a role and how powerful he is. Anyway if you like our work of sharing the knowledge kindly give your comments at our facebook page and stay connected with us. And/or if you are interested in DIY Guide of other DC and Marvel, check this out.